Over the last three months I have been gathering new wood and 'roughing out'* shapes to be boiled and kiln dried getting ready for the Summer and next Winter which tend to be my peak sales periods.

In January I was offered two 200+ year old barn door posts from a flint barn at Redstone Manor near Redhill, Surrey. They were quite a challenge to cut into usable pieces because they had a variety of rusty nails, screws, hinges and dowels embedded in them. I decided to do something different to really show off the wood texture and the results can be seen in the 'special oak' gallery and above.

I was toying with the idea of going up to Scotland again to get some more elm burr but then in February I was offered some wood from a really excellent burred** robinea (acacia) tree which I am working on now in March. Burr is so rare and valuable that the centre of the bowl cannot be wasted so I purchased a special coring tool to make progressively smaller bowls in a nested fashion. Several bowls are already in the kiln drying now. I am hopeful that they will make really beautifully marked bowls which will be on the website in April 2013. They make lovely unusual presents for a wedding or special anniversary.

The National Trust has made available some very good spalted beech which I am also working on. Spalted beech items are one of my best selling lines. Many of these items will be sold through Polesden Lacy National Trust shop but some, particularly the larger items, will be on sale on the web site soon.

Notes
* Roughing out is the conversion of logs to rough shapes, leaving enough thickness to allow shrinkage and movement as the rough-outs are dried before finishing.

** Burrs are warty growths sometimes seen on horse chestnut, silver birch, elms and less commonly on other trees . Burr is an abnormality of growth whereby the cells grow in attractive whorls rather than in straight lines as normal. Burr is quite different to plain wood and less prone to splitting as it dries.

So I have had a busy three months. I am lucky to enjoy what I do. 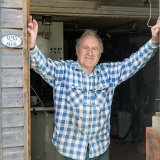 Examples of my Work